At the beginning of the 2000s, Breton archaeological maps showed an unequal distribution of known sites throughout the region. Some areas were rather dense as they had been the object of much research, but central Brittany was rather sparse. In order to improve our knowledge of the different areas, a partnership was created between the state (Regional Archaeological Service) and Pays du Centre Ouest Bretagne in order to carry out an archaeological inventory. Thus, what you see here, are the results of the study lead by Alain Provost and Éric Philippe between 2002 and 2009 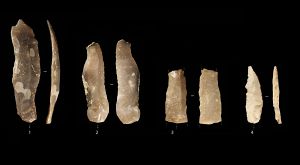 During Mesolithic times (9500 to 5000 BC), men were nomadic hunter-gatherers. Their movements are not clearly known but archaeological traces suggest a way of life based on frequent relocation. When they stopped, they had logistical bases like the Kerbizien cave in Huelgoat. In these bases they repaired their tools and their weapons and prepared what they had caught for eating. Although the caves were not man-made, they show a certain reflection on how to exploit natural rock formations and transform them into a place to live. The items found there suggest specialized tool-making; some were for hunting, others were for skinning animals or cutting up meat.

In Neolithic times (5000 to 2300 BC) man became more sedentary and started to cultivate the land and exploit the natural resources around him. Farming was born. In Brittany this period is characterised by menhirs, dolmens and other gallery graves. They are not the only signs of human existence at this time, but they are the most striking traces of it on our landscape. Dwellings that were made out of perishable materials have been recognized as such because of what remained of their foundations and their fireplaces. Some funeral monuments have not yet come to the surface. Although the Croaz dom Herry cairn in Saint-Nicolas-du-Pélem was dismantled, it was an exceptional example of structure and organisation but was only known on the coast. 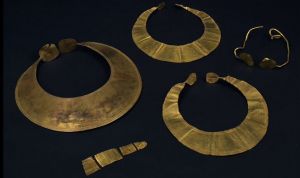 The arrival of bronze around 2300 BC brought about exchanges between Armorica, which had a lot of pewter, and the British Isles and the Mediterranean coast which both had a lot of copper. Indeed, these were the two metals required to make bronze. During this period, 10 to 40 metre wide burial mounds appeared. They often contained several individual graves which was a radical change from the collective tombs used during Neolithic times. The Bronze Age is also known for its repositories which were a sign of rituals and insecurity. The Kerboar deposit in Saint-Igeaux has, among other things, a cauldron in sheet metal. This provides us with useful informations about everyday utensils and metal work. 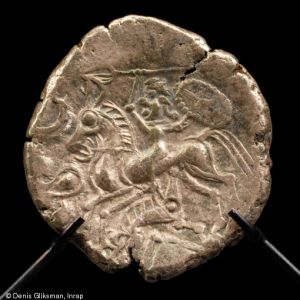 Iron appeared at the “time of the Gauls” around 800 BC. As it wasn’t as pliant as bronze, it was used for weapons first and for tools second. Rural activities and the acquiring of more specific skills brought about a network of farms. They were organised around two separate areas: the domestic area with the lodgings and outhouses and the agricultural area with the cattle and barns. There were closed cemeteries nearby which indicates that the farms were mainly family-owned. After 300 BC, the fortification of certain aristocratic farms (like the Saint-Symphorien one in Paule) shows that it was the upper class which was in charge of the land. The burying of one’s treasure like the Rosquelfen money repository found in Laniscat is proof of the wealthiness of some owners. 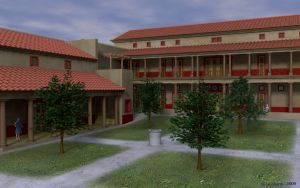 In Brittany, the Roman conquest was concluded in 52 BC. Vorgium was founded (today Carhaix) and became the new capital of the Osismes, the Gaul population in north-western Armorica. The town had a 27 km long aqueduct which not only brought running water to the public buildings but also a certain prestige. The Roman construction model was not only used in the towns but also in the countryside. The domus of the hospital in Carhaix is the most well-known in central Brittany and studying it has enabled us to understand the rise and fall of the town. The domus was made out of stone from the area, mainly from the Locuon quarry in Ploërdut; the importation of marble increased building costs. 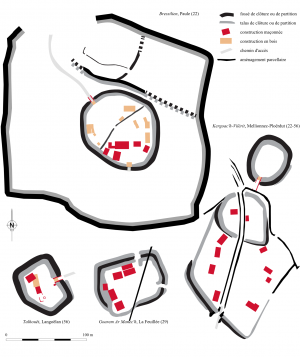 In the 5th century Armorica was a popular place for immigrants from the British Isles who were fleeing Irish pirates and Angle and Saxon invasions. A lot of parish enclosures and fortifications can be found in strategic places along the boundary between the Cornouaille and Vannetais areas, near to the boundary between the Osismes and the Vénètes populations. The internal organisation of the dwellings is similar to that of Ancient Roman villas: a separation between the dwelling itself, set on a promontory or headland, and the courtyard. A ditch and a wall surrounded the structure and protected it. The influences and exchanges with the British Isles and the Kingdom of the Franks (Francia) increased. The aristocratic Bressilien compound in Paule is a very good example of this as there were very few ceramic objects found there. This shows that wooden crockery was largely used which was the Anglo way of doing things. 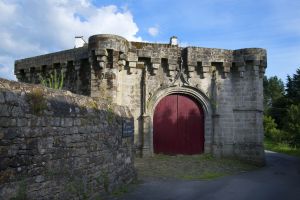 From the 11th century onwards, religious orders, especially les Templiers and les Hospitaliers (Templar and Hospitallers), started sowing on fallow land. In order to attract men, they organised a quevaise system of management in villages and hamlets especially in the Monts d’Arée area. This system was some kind of lease holding. The ruins of the Goënidou village in Berrien show that some of these small villages were abandoned. However, we don’t have enough written sources of information to know why. Conflicts between the Duchy of Brittany and the Kingdom of France empowered certain nobles and made them richer. Castles, some of which remain (in Corlay or Guémené-sur-Scorff), were symbols of a land which was divided between the counties and “vice” counties. The castles, whose role was to defend, slowly became more ostentatious and sometimes lead to the creation of a village.

The high number of these now known sites in central Brittany shows the scope of the research done. 866 sites were initially studied; today 1700 sites are now registered. Twice as many! We can therefore conclude that the archaeological heritage of central Brittany is as rich as in the other areas of the region.

What’s more, the sites are often in better condition because they have not been effected as much by urbanism and farmland consolidation. The quality and quantity of the information gathered enable us to reconstruct the evolution of this land over time.